Going remote in Kazakhstan and Kyrgyzstan

It was about to get dark and I already felt the cold air slowly penetrating the thin layer of clothes I wore.

I was traveling by horse through Kyrgyzstan’s share of the Tien Shan mountain range.

It was about to get dark and I already felt the cold air slowly penetrating the thin layer of clothes I wore. To continue further wasn’t an option – my horse was exhausted and the pass that lay in front of me was way too dangerous to attempt in the dark. I had to accept my faith and sleep here, at an altitude of about 3,300m, without a tent and proper clothing. Tomorrow, thinking of bathing in the hot springs – located a mere 8 hours ahead of me – would help me struggle through the last metres of altitude I had to gain. 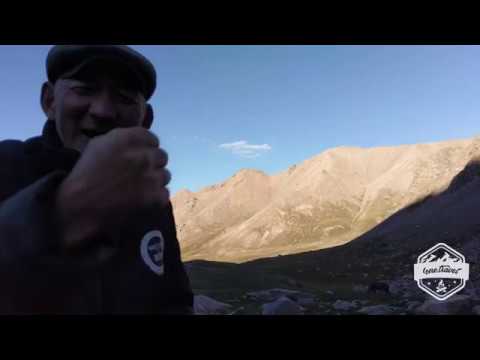 I was traveling by horse through Kyrgyzstan’s share of the Tien Shan mountain range. After the fire that I made using horse dung was extinguished (it didn’t work so well after all), I accepted my fate and tried to sleep. I couldn’t. Hours later, I sat on my horse again. Now in complete darkness, I was looking for a small house I had noticed hours earlier. It was difficult finding a building that I could only vaguely remember, using only a small flashlight, but after about an hour – and after mistaking a pile of massive stones as the house – it was finally there.

When I went inside the small, abandoned herder’s house, I was disgusted. There were animal carcasses everywhere and the smell was unbearable. But I did not have a choice, sleeping outside was simply too cold. And although the small house looked like it was in a nearly-collapsed state, and the big holes in the wall didn’t hold in much warmth, at least it blocked a bit of the cold mountainous wind.

When I woke up after a night of sleeping rough, the flowing river was partly frozen. I managed to get some of the cold water down my gullet, prepared the horses, and rode on.

Later that day and kilometres further, I found a yurt (a kind of round tent which was a traditional Mongolian dwelling used by Nomads) and asked the family living inside for some hot tea and food. I was surprised by the fact that they were living here, all alone, without any neighbours. Outside their yurt, I already noticed a handful of slaughtered sheep, and visitors were welcomed by loosened sheep heads and legs on the inside. The drunk, friendly and slightly aggressive inhabitants even gave me a live demonstration of how they cook such food.

The situation I just recalled was merely one of many experiences with rural life in Kazakhstan and Kyrgyzstan, highly influenced by Mongolian traditions and conventions. In every country I visit, I always try to go to the villages. To the rural areas. They’re the most interesting, and they always make for the best memories. Village life in these countries is certainly different, especially compared to other post-soviet nations.

For example, once, I went to Zhalanash, a small settlement near the Aral Sea, which is actually a lake. In fact, it was formerly one of largest lakes in the world, but the lake has been steadily shrinking for decades, after the rivers that once fed into it were diverted by Soviet irrigation projects. I got invited t by a family living in one of the few villages that were still able to preserve themselves using fishing as their main method for gaining income and food. Sleeping outside, under a canopy of stars, and hearing the camels grunt (they’ve got a lot of wild camels around) wasn’t so bad after all.

Ironically, while hitchhiking, I ended up in a village with the same name a few weeks later (and hundreds of kilometres further east). Night was approaching, and I didn’t have a place to sleep. I knocked on a few doors and finally managed to stay in a hut in one of the villager’s yards for a small fee. I remember how, at night, a few young drunks shouted at my window, “Come out! Come out!”

Alcohol is almost always a constant factor in the rural places I visit, whether it be midus in Lithuania (especially great after their sula – a kind of fresh juice which leaks from the trees), chacha in Georgia’s mountains, rakia in the Croatian hills, whiskey in Thailand’s developing Isan region, langkau in a tribal settlement in Malaysia, rice wine in all other Southeast Asian villages, vodka in all other unmentioned countries, and many, many more.